You have successfully deleted an item.
McGill University 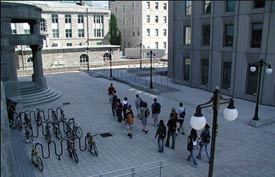 McGill University is public co-educational research university located in the city of Montreal. McGill has 21 faculties and professional schools and offers degrees and diplomas in over 300 fields of study. The university also has field research stations in Mont-Saint-Hilaire and Schefferville, Quebec; Axel Heiberg Island in Nunavut; and Holetown, Barbados.

The main campus is situated in downtown MontrÃ?Â©al at the foot of Mount Royal. Most of the buildings are situated in a park-like campus north of Sherbrooke Street and south of Avenue des Pins between Peel and Aylmer streets.
Quebec Universities
Browse All